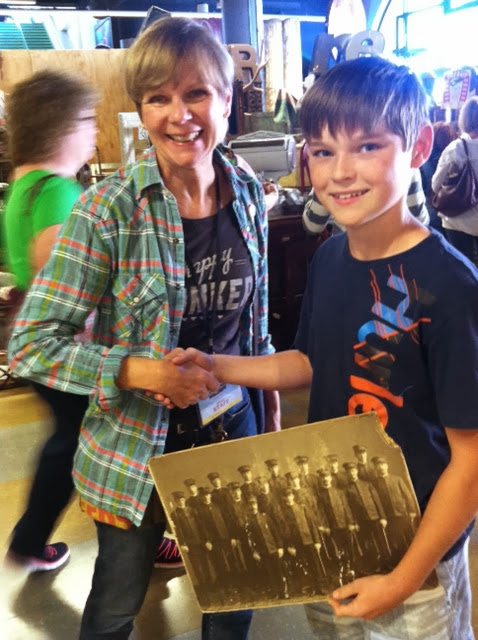 Meet Zane Alexander, a young and enterprising junk entrepreneur from Boone, Iowa!
Zane was in the house yesterday and today, a birthday trip from his folks.
He is 15.
Zane maintains a web site and a Facebook page for his business, Inspired Finds, which sells antiques and vintage, as well as repurposed pieces.
“I went with my Dad to auctions when I was younger,” he said (referencing the old days, when he was seven). “I was about 10 when I got interested in antiques. I’d go to auctions and see something sell for two bucks, and then I would see it at the antique store  for 20 bucks. So I got to thinking, ‘well, I can do that.’ “
Zane is a classic entrepreneur and multi-tasker. He wrestles for his high school team, and attends auctions Wednesday afternoons (in the wrestling off-season.)
“I do a lot of industrial, a lot of repurposed,” he said. “My most unique piece is an old tube-style TV that my Dad was going to throw out. I gutted the inside and had my dad cut some plywood so it had two sides. I put it on a Lazy-Susan device. I glued in action figure characters. One side is the Wizard of Oz. The other side is the original Planet of the Apes. I wanted to make them older movies because it was an older-style TV, the kind with knobs.”
Zane is a veteran of several shows, but said the Bonanza is the best!
So, in addition to a great junking eye, he has impeccable taste!
Zane, we wish you well in your endeavors. We know you’ve got many more chapters to write in your junking book!
Kim