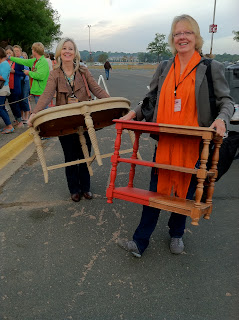 Ah, the fall edition of Junk Bonanza is a pleasant memory now! I never did get around to curating the photos and facts on our fabulous gold-level sponsor, Annie Sloan, during that mad, three-day dash at the Bonanza! So I wanted to share some pix with you now!
Here are Annie Sloan Unfolded‘s marketing director, Debbie Dion Hayes, and Melissa Riche, the Los Angeles-based marketing guru for Annie Sloan, carrying in pieces for display at their rockin’ booth! 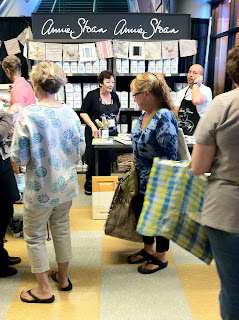 Executive assistant Teryl Flettrich and Scott Rickert of Annie Sloan Unfolded, the North American arm of Annie Sloan with headquarters in New Orleans,  caught in a quiet moment at the booth, usually so mobbed I couldn’t get in for any decent pictures! 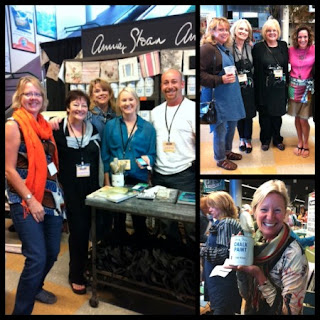 This collage was shot by Debbie and posted on her blog in an entry about the Bonanza!
Left above are Melissa and Teryl, Minnesota AS dealer Christine Kramer of Denim Rose in Savage and Lisa and Scott Rickert, founders of Annie Sloan Unfolded! Right is Christine, reps Phyliss De Vries and Mary Corso, and Minnesota’s only other AS dealer, Amanda Ficek of Mama’s Happy in Independence! Bottom right is Eileen, whom Debbie described as a very happy new Chalk Paint enthusiast! 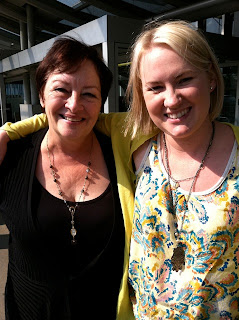 Here’s a shot of Teryl and Lisa at the Lindbergh Terminal of the Minneapolis Airport late Sunday morning at the Bonanza, just before leaving Minnesota. They had dropped their rental about 7 a.m. and I retrieved them plus Debbie for breakfast in my ‘hood in southwest Minneapolis at the Zumbro Cafe! 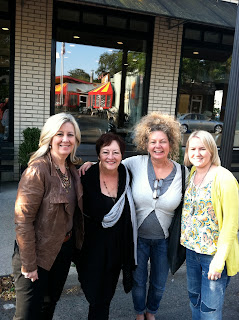 Debbie had to head home on an earlier flight (the Zumbro graciously called a cab, whose driver shot this picture!). Then we headed out for an hours-long tour of Minneapolis and St. Paul by car. Prior to visiting Minneapolis, Lisa was expecting cold, rural flatlands, so she was pleased to see everything from pine trees to a thriving urban scene! And the New Orleaners were touched, as well, to see the Mississippi River from this end!
How successful was the Bonanza? Annie Sloan Unfolded loved joining us, and apparently, you attendees loved them, too!
Scott noted that they sold 440 individual quart cans of paint, 320 cans of wax (with clear outselling dark almost two to one)! Additionally, they sold all of the medium-sized brushes they brought, most of the small ones and more than 100 books, mostly copies of Annie’s “Quick & Easy Paint Transformations.”
The best seller? “Old White,” followed by “Graphite.”  “Duck Egg Blue,” the main color in the bench-from-a-door Flea Market Style makeover project that was a Lucky Friday giveaway and stationed right next to the AS booth, sold out on the first day! We like to think our bench had something to do with that!
All in all, it was a wonderful time. We loved meeting our new friends, and can’t wait to see them back!
Meanwhile, plans are cooking for the very first spring Bonanza, April 18-20! We can’t wait!
Kim